Humankind has mastered fire, flight and Facebook, yet growing vegetables in Saskatchewan on a large scale outside of potatoes has yet to be accomplished.

Dan Erlandson from Spring Creek Market Garden near Outlook, Sask., is working on it though.

“There’s a huge market for growing vegetables in Saskatchewan and we haven’t even scratched the surface of it,” he said. “There aren’t a lot of things that haven’t been done…. This is something we can create history with and that drives me quite a bit.”

After four seasons working with Co-op through the Prairie Fresh Food Corporation, Erlandson’s operation has experienced a “complete overhaul” – everything has changed from planting and harvest to storage and shipping.

Four years ago, Erlandson was growing vegetables for farmer’s markets and began growing sweet corn for Co-op on 50 acres. This year, he’s planting 215 acres with an assortment that includes sweet corn, broccoli, potatoes, romaine lettuce, green and red leaf lettuce, celery and Brussels sprouts – the latter of which start in the greenhouse in March, are transplanted outside in May and won’t be harvested until September.

“We were growing so fast,” Erlandson said. “He takes care of machine operations. I take care of growing and business… My wife takes care of all the human resources and farmers’ markets.”

From one greenhouse to eight, they also built a 9,000-square-foot facility for washing, packing, sorting and storing produce – they previously washed and packed outside.

The operation isn’t the only thing to grow, either. The Erlandsons’ eldest daughter Calla is now five years old, and the family now includes three-year-old Raulan and seven-month-old Lainey. 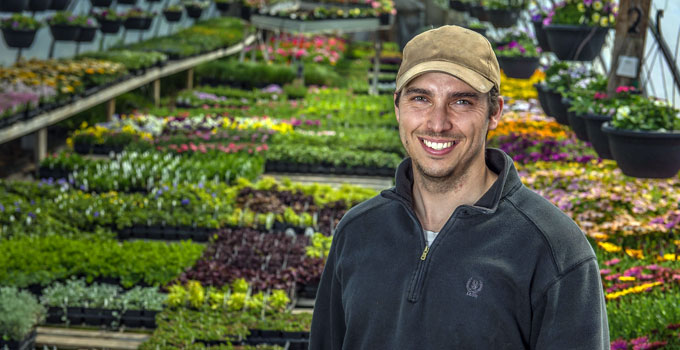 Erlandson acknowledged vegetable farming is a tough job, one made more difficult by the standards required by retails. In the past, he noted, there was not the appetite nor the economics for local products as there are now.

“We’re developing the industry and providing great products to our members and customers. It’s the Co-op way.”

Furi noted that this collaboration has led to more opportunities to explore and experiment with growing vegetables. For example, Co-op is working with the Saskatchewan Ministry of Agriculture and the University of Saskatchewan on growing melons, jalapeno peppers, Romano beans and field tomatoes.

It’s this type of support from Co-op that Erlandson appreciates.

“They’ve been fair in letting us learn how to grow things and helped us through the hiccups we’ve had,” he said. “There’s logistics, storing and cooling – things none of us at the farmers’ market level had any experience with.”

Seeing his product on store shelves is a reward for him, as is helping feed people. There’s also no downside to being self-sufficient.

The Erlandsons were named Saskatchewan’s Outstanding Young Farmers in 2016. They’ve come a long way since Erlandson restarted his parents’ vegetable farm as a summer job when he was 16. He had no idea this is where his life would lead, and still isn’t sure how far they’ll go.

“At some point we’ll just have to say no to something,” he said. “Whether or not it succeeds in the end, I can at least look back and say we gave this thing a shot.”

For now, though, he just keeps on growing.