Itzke River Farm is a 1,200-acre operation growing lettuces, cauliflower and celery, amongst other vegetables. Despite its considerable size, it remains a family business now entering the third generation and celebrating 60 years in business this year.

Today, Astrid Itzke-Meilleur co-owns the farm near Marquette, Man., with one of her two brothers, Uwe, and works alongside 5 other family members which includes her two oldest sons.

“It’s wonderful that they’ve invested their lives into it,” Astrid said on working with sons Mats and Lars Meilleur. “It’s a wonderful thing to have new ideas and new energy.” 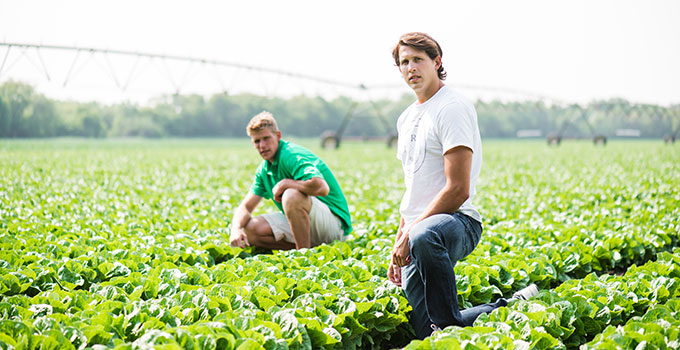 Mats and Lars are to one day continue the legacy established by their grandfather, Johannes Itzke, in 1955. Johannes, the youngest of 13 children, immigrated to Canada in 1953 with only $25 borrowed from his sister. A job on the railway brought him to Winnipeg, where he tried starting a nursery but switched to the more lucrative vegetable industry.

“(Vegetables) became his passion,” Astrid said. “Mom did all the bookwork, all the banking. Dad did all the selling and he was out in the field.”

Astrid recalled the strong work ethic passed down from her parents. She and her brothers would spend holidays and time after school in the greenhouses and gardens. Although they had the choice to leave and do what they wanted, Astrid and Uwe chose to continue the farm operation. Work can mean being in the field 10 to 12 hours a day, seven days a week.

The only thing direct seeded at Itzke River Farm is corn. Everything else gets started in early March in the 72,000 square feet of greenhouses on the farm.

“It starts with a quality seed,” Astrid said. “Then you toughen them up to put them in the field.”

There’s a fine art to growing vegetables, from crop rotations to staged planting throughout the season. Seedlings begin being transplanted into the field in mid-April on average, with the first harvest coming in June.

“Not only do you have to deal with the weather, you have to plant them so they’re ready on time when the stores are going to want them….There’s a lot of math and thinking that goes into it.”

To ensure quality, products are only handled twice: picked then packaged. Packaged products are then sent to warehouses to be cooled through forced air refrigeration to help extend shelf life.

While Johannes continued to add acreage during his tenure, Astrid said refining crops has increased the productivity and yield of existing acres.

So there’s more work than ever not only in production, but managing sales, logistics, marketing and human resources for their 120 seasonal workers. Astrid said her dad was proud of the farm’s success.

“Milestones in life should be celebrated and we will be doing that at the end of the season,” Astrid said.

It’s the middle of growing season and there’s work to be done. Johannes would be proud of his family’s work ethic.